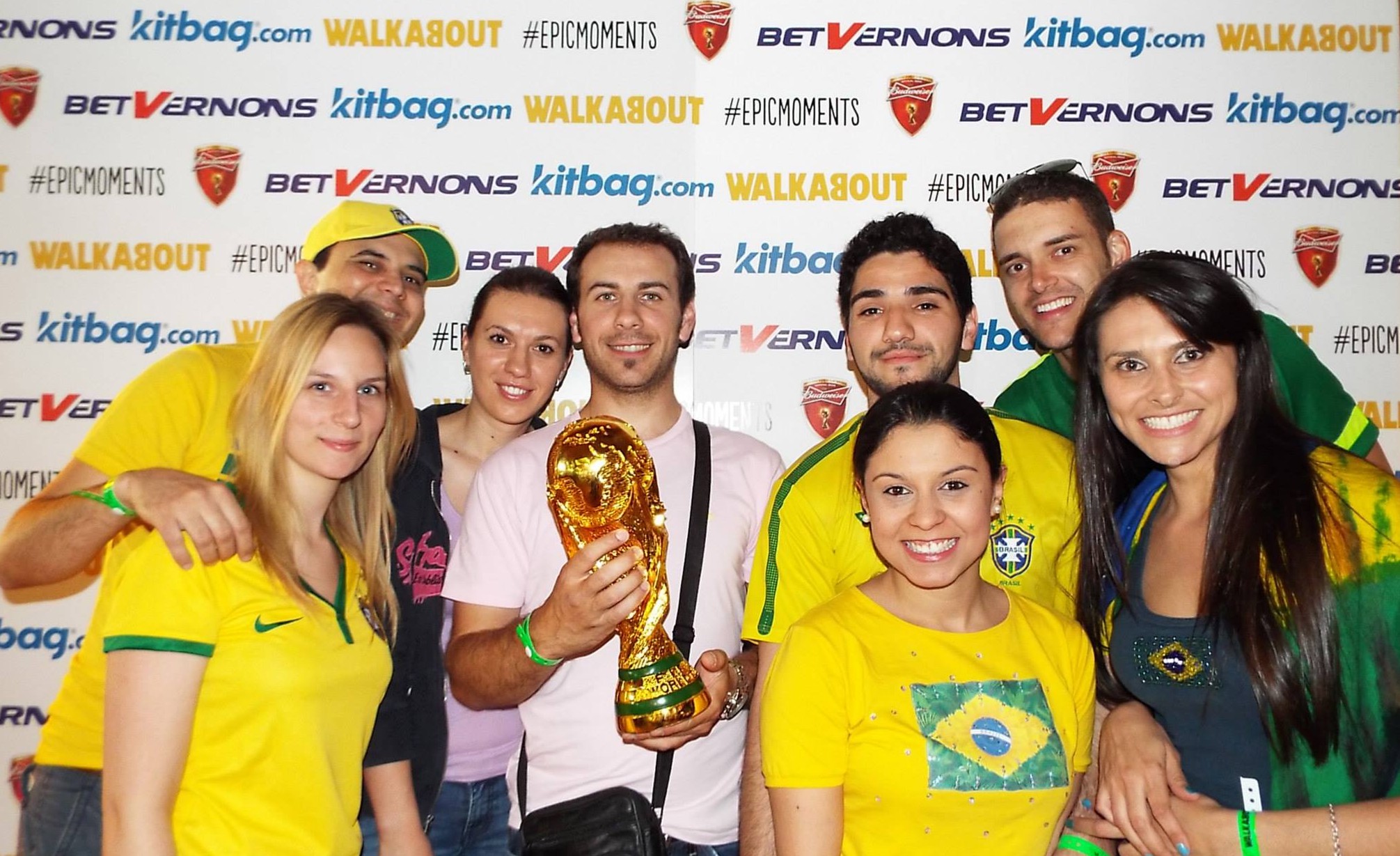 Now that Brazil 2014 has drawn to a close, we’re left to review its success for our clients and Walkabout in particular, where we implemented an unprecedented level of activity for a UK bar group.

We secured a commercial partnership with Kitbag (market leading official sportswear provider) in addition to our existing deal with BetVernons.  Kitbag suitably provided us with the kit for our staff to wear during the matches. Both Walkabout and Kitbag were equally 'giddy about Brazil'.

BetVernons representatives were also on hand during selected matches and plenty of our customers were keen to get involved. We also provided some other interactive ways for the customers to engage with the brand in venue, including a branded World Cup wall chart, live screen content, video advertisements and outdoor signage. 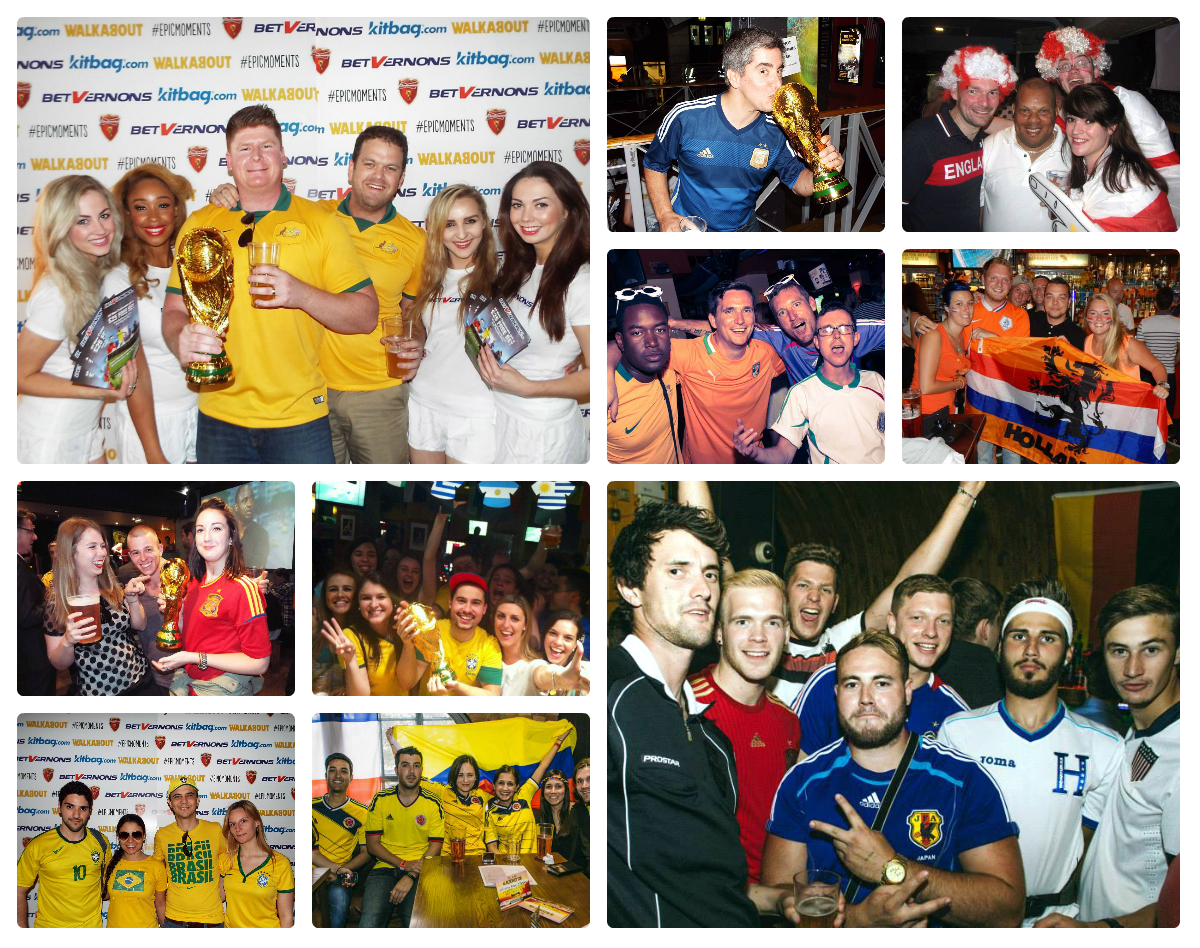 The customers are what make the experience, so what better way to show it in film, than by the capturing the thoughts of our customers on camera? We interviewed fans of different nations throughout the tournament and captured some amazing clips of the fans reacting to the drama.  Check out the reaction when the Socceroos took the lead against the Dutch. One of a number of #EpicMoments that we caught on camera..... 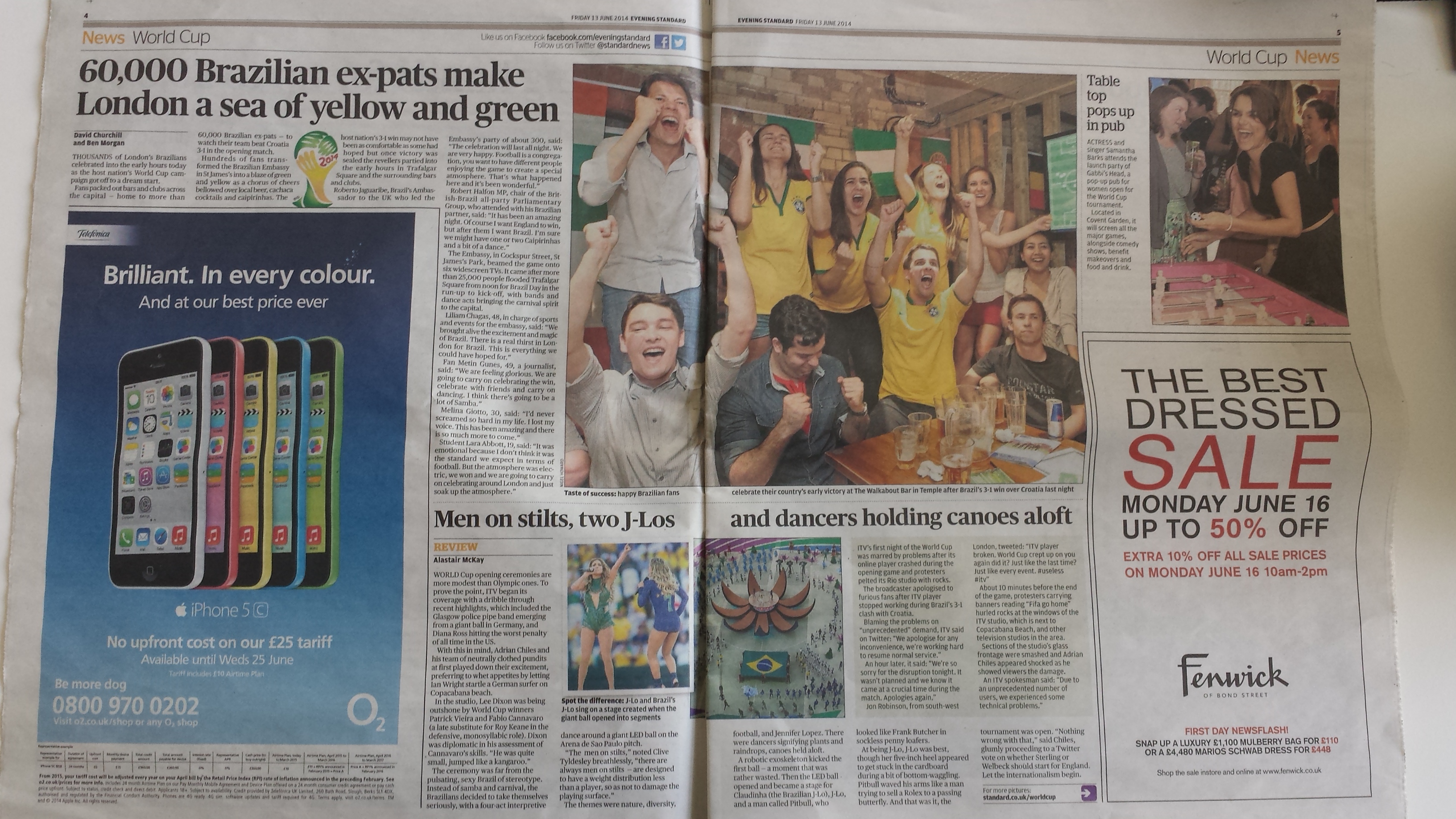 We produced a range of graphics and printed materials using an updated sports design for the tournament in Brazil.  The takeaway fixture card worked similarly to a wallchart in that it encourages the user to fill in the scores in the tournament all the way to the final. The perfect pocket guide....

Prior to the World Cup, we helped install Screach TV into the majority of Walkabout venues and then worked on the content that would shape our World Cup experience.

Here's an example of some of the team content that we produced for customers to view prior to the match. We produced team profiles, player profiles, match promo clips and squad lists for each of the 32 nations and scheduled it accordingly for each of the 64 matches! 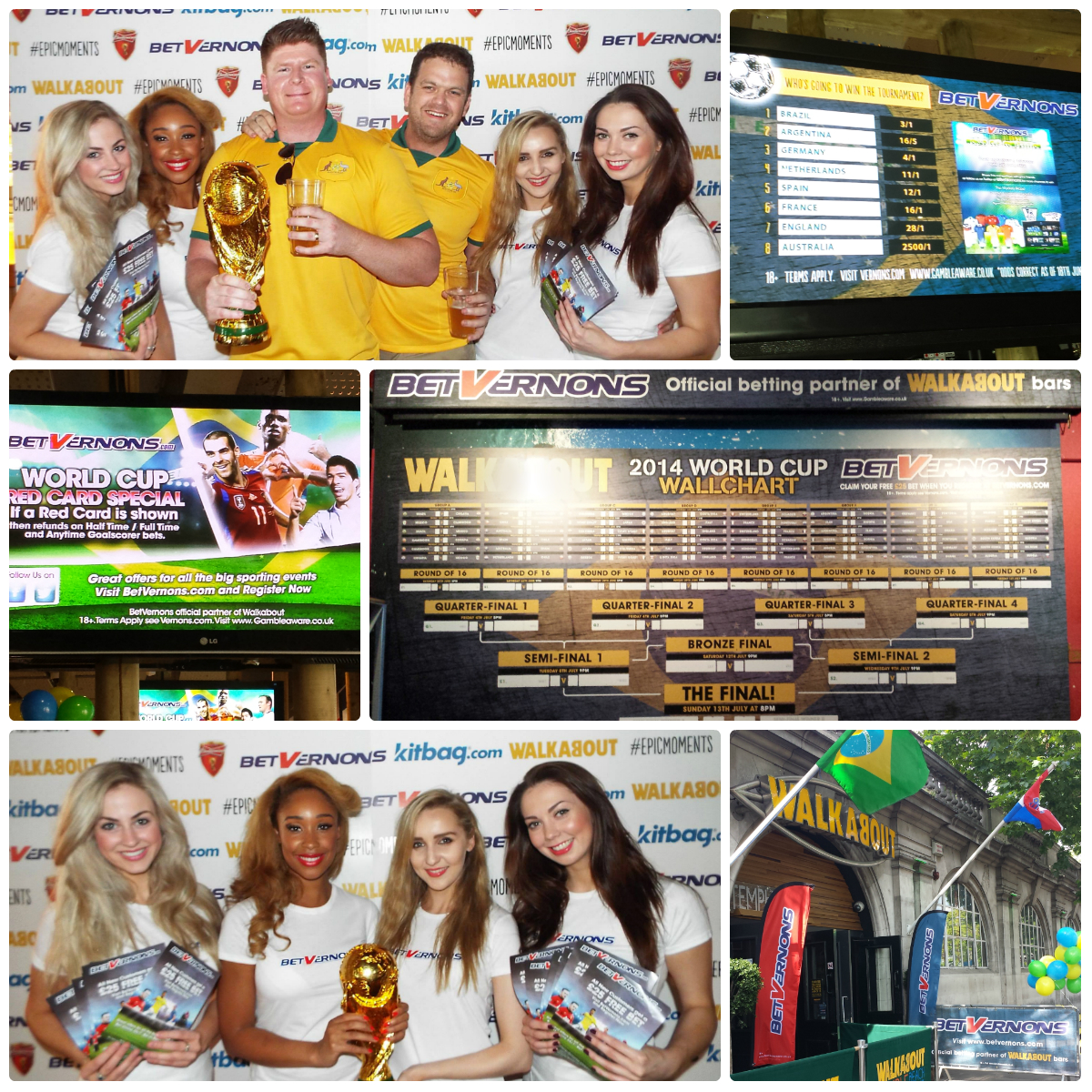 Both brands featured on Screach TV and their logos were included on our photo boards that we used to create a photo opportunity for customers throughout the tournament.  We also arranged for the World Cup trophy (not the real one, but a very convincing replica) to be sent to each of the venues.  These were hugely popular with customers as you can see below.....

One of our main objectives for the campaign was to attract an international crowd - fans of all nations, not just England! We applied some communication strategies, and the results were pretty fantastic....

The campaign received significant press coverage and online mentions.  The Evening Standard featured an image of Brazil fans at Walkabout Temple on a double page spread on pages 4 and 5 after day one of the tournament.  The amazing crowd we had for the opening game set the tone for the rest of the competition and we were even surprised ourselves to see so many fans of nations such as Colombia, South Korea and Iran arrive at Walkabout throughout June and July. 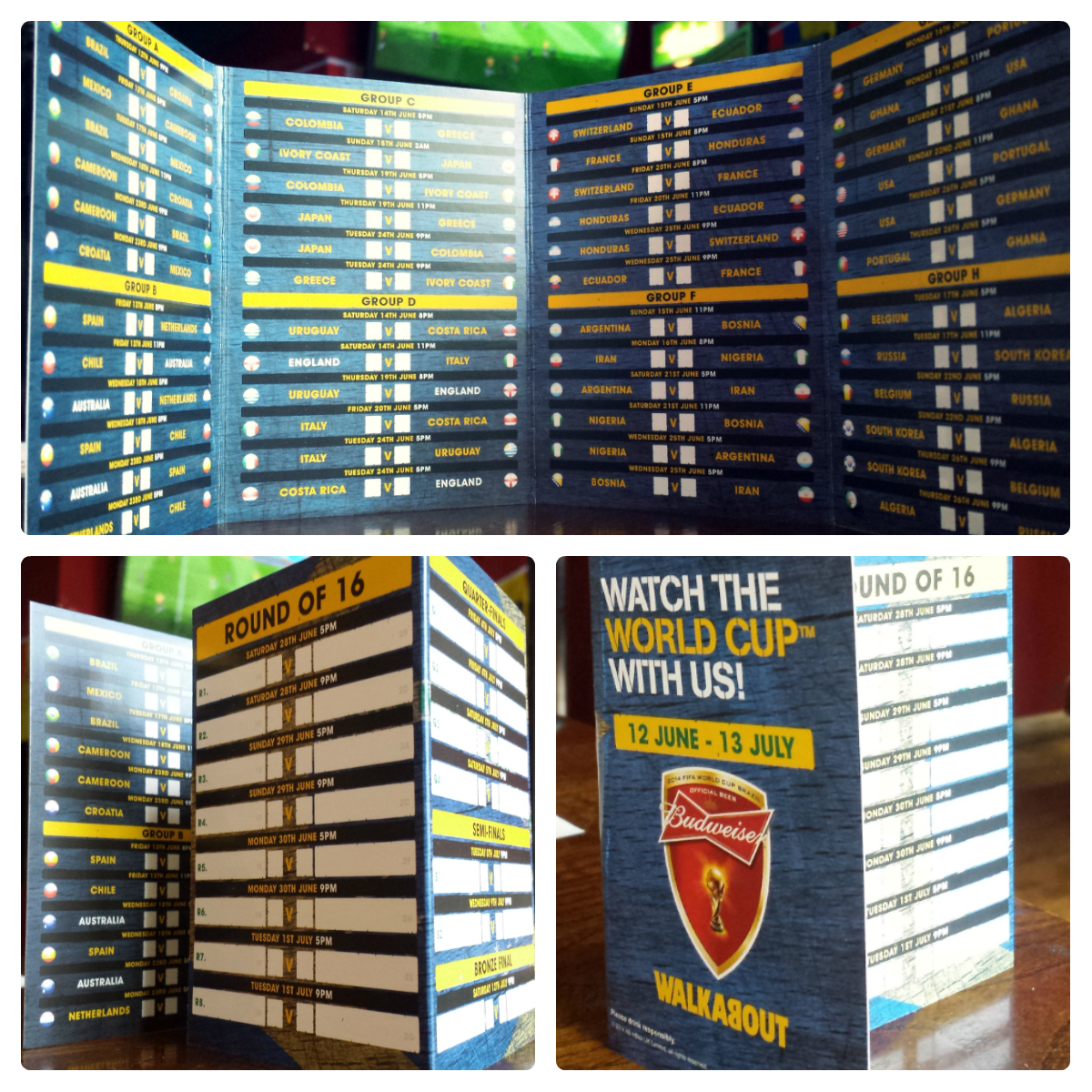 This is just some placeholder text. Click to edit it.
Prev. Project
All Projects
Next Project
[easy-share counters=1 counter_pos="inside" native="no" hide_total="yes" fullwidth="yes" fullwidth_fix="100"] 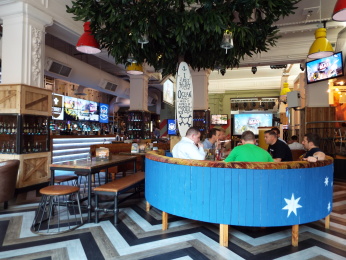