The Superbowl comes to Walkabout 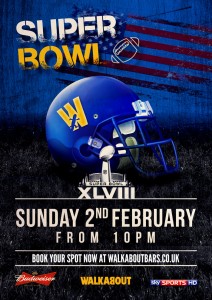 Walkabout is THE place to watch the Super Bowl
The 48th edition of the Super Bowl will be held on Sunday 2nd February 2014, at the MetLife Stadium, New Jersey and will be shown live, in HD, across 24 Walkabout venues in the UK.
The Super Bowl is an iconic event (the single biggest sporting event in the World) and UK popularity for the sport is at an all-time high, following the success of the NFL international series. Regular season matches had been played once a year at Wembley Stadium for the last 6 years and British fans were treated to two games in London. Later in 2014, there will be three occasions when the NFL descends on our shores, proving its massive appeal.
Fans across the globe are preparing for February 2nd and Walkabout is offering the best viewing experience with bigger, better and more screens with full coverage, live in HD. The extravaganza will be starting with the build-up from around 10pm and including the ever popular half-time show – this year featuring Bruno Mars.
Customers can simply turn-up on the night or, to be sure of the best experience, Walkabout recommends pre-booking a spot to guarantee a superior view of the screen, table service, and a selection of food and drink offerings on arrival. Bookings can be made on the new Walkabout website at www.walkaboutbars.co.uk.
In association with Budweiser, Walkabout is proud to be bringing this event live to their customers and will be dressing their venues accordingly to truly bring the excitement and anticipation of the Super Bowl to life.
As of 6th January 2014, eight franchises advanced through the gruelling regular season to reach the divisional playoff stage, which features four teams from each of the AFC and NFC divisions. The winners of the divisional playoffs will then play in their respective divisional championship match on Sunday 19th January. The two divisional champions will then meet at Super Bowl XLVIII two weeks later on February 2nd.
More details will follow as the teams are determined later in January.
Who Are Walkabout?
Walkabout is the original Australian brand and the people who first brought you the awesome spirit of Australia. We’re passionate about our world and we want to share it with you. Our homeland is as broad and diverse as our tastes, style and ambition. WE’RE CREATING NEW ENVIRONMENTS THAT SHARE THE BEST OF EVERYTHING AUSTRALIAN. From the best seats on the high street for sport, to the ultimate party venue, a chilled out place for friends to meet up by day or revel in our famous event nights. WELCOME TO OUR WORLD, WELCOME TO WALKABOUT.

Walkabout & Sport
Walkabout’s Sport Philosophy is simple – the big game is better on a big screen, and you can really get behind your team better with people around you. A goal is so much better celebrated together. Win or lose, sport is always better shared…
The Walkabout venues that will be showing the Super Bowl live are: Barnsley, Birmingham, Bournemouth, Bristol, Burnley, Cardiff, Carlisle, Derby, Doncaster, Exeter, Glasgow, Hanley, Leicester, Lincoln, Liverpool, Manchester, Middlesbrough, Newquay, Nottingham, Reading, Swansea, Temple, Watford and Wolverhampton.

Following a career with Scottish & Newcastle, Slug & Lettuce and the Spirit group Paul formed Magnify marketing in 2005. Its aim to be a leading customer communications agency for the leisure and hospitality industry. Magnify Marketing has grown supporting large national organisations as well as leading edge independents. Proud of our team and work we always look to add value at every turn and be fun to work with..... as life is too short to be miserable!